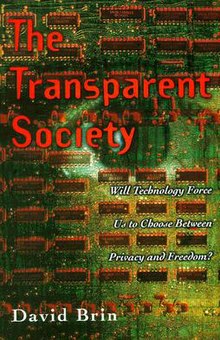 fiction author David Brin in which he forecasts social transparency and some degree of erosion of privacy, as it is overtaken by low-cost surveillance, communication and database technology, and proposes new institutions and practices that he believes would provide benefits that would more than compensate for lost privacy. The work first appeared as a magazine article by Brin in Wired in late 1996.[1] In 2008, security expert Bruce Schneier called the transparent society concept a „myth“[2] (a characterization Brin later rejected),[3] claiming it ignores wide differences in the relative power of those who access information.[2]

Brin argues that a core level of privacy—protecting our most intimate interactions—may be preserved, despite the rapid proliferation of cameras that become ever-smaller, cheaper and more numerous faster than Moore’s law. He feels that this core privacy can be saved simply because that is what humans deeply need and want. Hence, Brin explains that „…the key question is whether citizens will be potent, sovereign and knowing enough to enforce this deeply human want.“

This means they must not only have rights, but also the power to use them and the ability to detect when they are being abused. That will only happen in a world that is mostly open, in which most citizens know most of what is going on, most of the time. It is the only condition under which citizens may have some chance of catching the violators of their freedom and privacy. Privacy is only possible if freedom (including the freedom to know) is protected first.

Brin thus maintains that privacy is a „contingent right,“ one that grows out of the more primary rights, e.g. to know and to speak. He admits that such a mostly-open world will seem more irksome and demanding; people will be expected to keep negotiating the tradeoffs between knowing and privacy. It will be tempting to pass laws that restrict the power of surveillance to authorities, entrusting them to protect our privacy—or a comforting illusion of privacy. By contrast, a transparent society destroys that illusion by offering everyone access to the vast majority of information out there.

Brin argues that it will be good for society if the powers of surveillance are shared with the citizenry, allowing „sousveillance“ or „viewing from below,“ enabling the public to watch the watchers. According to Brin, this only continues the same trend promoted by Adam Smith, John Locke, the US Constitutionalists and the western enlightenment, who held that any elite (whether commercial, governmental, or aristocratic) should experience constraints upon its power. And there is no power-equalizer greater than knowledge.[4]

Transparency is sometimes confused with equiveillance (the balance between surveillance and sousveillance). This balance (equilibrium) allows the individual to construct their own case from evidence they gather themselves, rather than merely having access to surveillance data that could possibly incriminate them. Sousveillance therefore, in addition to transparency, assures contextual integrity of surveillance data (i.e. a lifelong capture of personal experience can provide „best evidence“ over surveillance data to prevent the surveillance-only data from being taken out of context).

Somewhat more nuanced than simply being „against privacy,“ Brin spends an entire chapter exploring how important some degree of privacy is for most human beings, allowing them moments of intimacy, to exchange confidences, and to prepare – in some security – for the competitive world. Nevertheless, he suggests that we currently have more privacy than our ancestors, in part, because „the last two hundred years have opened information flows, rather than shutting them down. Citizens are more able to catch violators of their rights – and hold them accountable – than commonfolk were in the old villages, that were dominated by local gentry, gossips and bullies.“

This might seem counter-intuitive at first. But he uses the song „Harper Valley PTA“ as a metaphor for how people can protect their eccentricities, and even some privacy, by assertively „looking back.“ Brin also points to restaurants, in which social disapproval keeps people from staring and eavesdropping, even though they can. Enforcement of this social rule is possible because everybody can see.

From this perspective, a coming era of „most of the people, knowing most of what’s going on, most of the time,“ would only be an extension of what already gave us the Enlightenment, freedom and privacy. By comparison, he asks what the alternative would be: „To pass privacy laws that will be enforced by elites, and trust them to refrain from looking at us?“

Brin participated in the opening keynote panel discussion at the 2005 Association for Computing Machinery (ACM) Computers, Freedom, and Privacy conference, where 500 sousveillance devices were also created to contextualize and explore this debate further. Each attendee was given a wearable camera-dome bag which created, in effect, an inverse panopticon, see inverse panopticon, Thomas Barth, 1994 CCC Berlin.

Brin has introduced versions of the concept into his fiction. In Earth, the setting’s future history includes a war pitting most of the Earth against Switzerland, fueled by outrage over the Swiss allowing generations of kleptocrats to hide their stolen wealth in the country’s secretive banks. The war results in the end of secret banking and the destruction of Switzerland as a nation. In the setting’s present, surveillance by elderly retirees wearing recognizable networked camera-glasses is common. His novel Kiln People is set in a future where cameras are everywhere and anyone can access the public ones and, for a fee, the private ones.